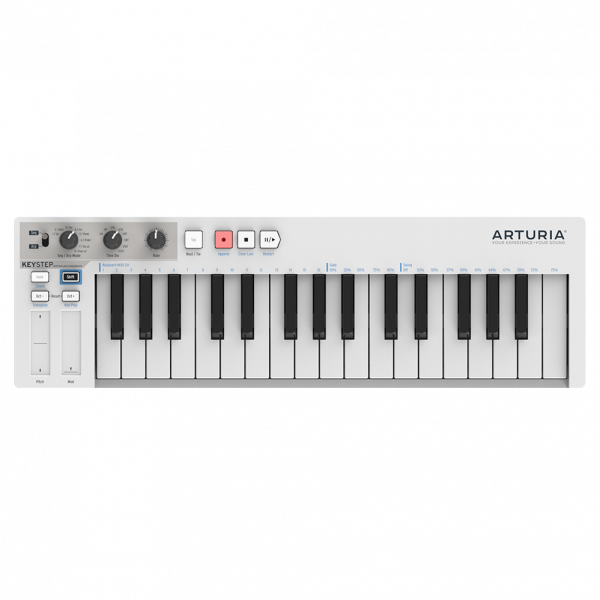 Be the first to review this product
EGP 9,039.99
Small-format 32-key step sequencer with multiple modes and great connectivity
Availability: Out of stock
SKU
KeyStep

Arturia KeyStep is a small but powerful MIDI and CV step sequencer controller keyboard, featuring an arpeggiator, chord mode, and multiple outputs that will let you create music using all your audio gear, whether you have outboard synth modules, virtual instruments, or a modular synth setup.

Featuring a great-feeling 32-key keyboard, Arturia’s own small format “Slim keys” give you more range than regular small MIDI controllers do, and have a nice professional feel that’s often missing in budget MIDI keyboards. KeyStep has two switchable modes: arpeggiator and sequencer. As an arpeggiator, KeyStep lets you play arpeggios in multiple modes and time subdivisions, and in perfect sync with your DAW or other gear. As a sequencer, it totally redefines what’s possible with a small-format MIDI controller. Create and tweak huge patterns of up to 64 steps, and up to 8 notes of polyphony deep, all with the same controls as the arpeggiator.

Get your vintage gear and modern tech working together

KeyStep features multiple outputs, including 3 CV outs, sync in & out, MIDI in & out, as well as MIDI over USB, letting you synchronize practically any music tech gear whether vintage or modern, and have everything performing in harmony.

Whether it’s the sleek, contemporary look, the massive functionality, or even the fact it can be used with an iPad via the camera connection kit, the Arturia KeyStep is seen in studios everywhere. Massively affordable, yet hugely versatile. No simple MIDI keyboard; KeyStep is a controller that truly puts you in control.