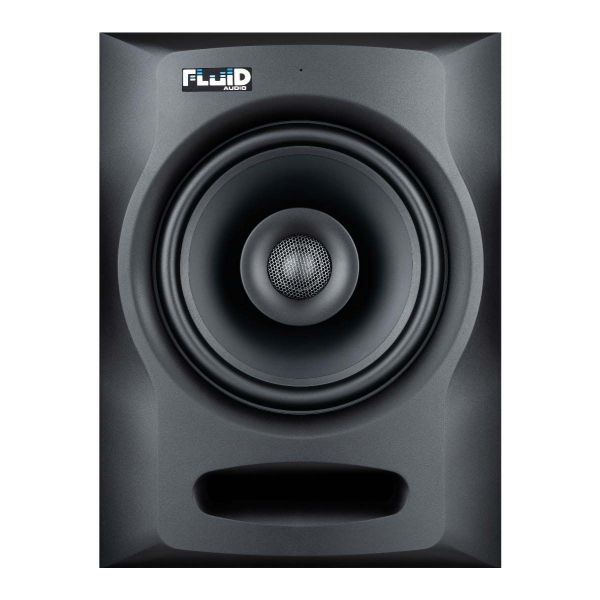 Be the first to review this product
EGP10,000.00
Coaxial Monitor, 8" Studio Monitor with Class-D Amplification
Availability: Out of stock
SKU
FX80

Introducing our new FX series of coaxial studio monitors.
Improving on our successful FX8, we now introduce the FX80.
We have taken users feedback and improved on all points.
We will claim this is the best sounding studio monitor below $300

New, contoured baffle enclosure design
Keeping true to the original "keyhole" design, the FX enclosure has been updated with a complex radius front baffle, which not only looks pretty cool, it improves cabinet defraction.

Coaxial driver
Mounted in the center of the woofer is a 30mm silk dome tweeter in a coaxial configuration. Using this technology (unique in its price range) makes it a "point source" device, meaning that all the sound emanates from a single point - not points that are 10" apart. This is crucial for improving off-axis response, but also allows for a more compact footprint cabinet.

Boundary compensation DIP switches
Sometimes the spaces where we mix aren't the most forgiving acoustically
(especially if you're in a home studio).
The FX series monitors come equipped with boundary control EQ switches, that allow you to compensate for spaces that may not have been "tuned" or just need to be adjusted due to their proximity to the wall behind them. There is also a guide conveniently printed on the rear panel to show how the DIP switches work, and a more detailed explanation in the user guide.

LED indicator on front baffle
The illuminated LED on the front panel is not only a status indicator, displaying whether the FX monitor is on, off or in standby, but also acts as an alignment beacon which allows you to properly align your speakers to your ear level.

A Coaxial Monitor for the 21st Century

The Fluid Audio Coaxial speaker design is notably different from traditional coaxial designs. Coaxial monitors in the 50’s and 60’s placed the high frequency driver behind the woofer, “porting” the high frequency through the woofer’s voice coil opening. This design effectively used the woofer’s cone as the wave guide, or horn. Since the woofer’s cone is constantly moving (sometimes dramatically as it plays bass frequencies), there is a significant amount of Intermodulation distortion and audible smearing that happens as the high frequency radiates off the woofer’s cone.
The coaxial design of the Fluid Audio FX and FPX series places the high frequency device in front of the woofer, secured to a fixed post. The tweeter is mounted in a hard plastic wave guide that allows the high frequencies to flow uninterrupted, so there is no audio smearing from the woofer’s movements. By using the on-board DSP, 48 and 36db per octave Linkwitz-Riley slopes not only perfectly blend the low and high frequencies, but are also used to filter out acoustic anomalies inherent in coax designs (as the tweeter does not have a full size baffle to radiate from.) In addition to these unique benefits, users get all the other known benefits of a coaxial driver – Symmetrical off-axis response (which creates a bigger, more even and consistent sweet spot) and that of being a “point source” device, which allows better phase coherence between drivers resulting in extremely realistic imaging. Whether upright or laid on its side, the Fluid Coaxial design will perform identically making studio positioning easier and more user friendly.

Front-loaded slot port design
The bass-reflex slot port tunes the cabinet to maximize the bass output efficiency of the speaker. It is placed on the front panel not only to directly radiate the bass energy towards the listener, but also for flexibility of placement in your studio.

Updated Tweeter Grille protection
The FX coax design, with the tweeter suspended in the middle of the woofer,
is very robust. As such, it provides outstanding protection for the woofer itself. However, the tweeter needs protection as well, this is why we added a small, steel perforated grille to protect the delicate silk diaphragm of the tweeter.

"Imaging and Depth"
It's one thing to put high quality speaker drivers in a cabinet with an amplifier and call it a great speaker. But for a transparent reference monitor, that is only the beginning.

Painstaking crossover design and listening sessions were undertaken to optimize not only a flat on-axis frequency response, but a depth of soundstage that has become the hallmark of Fluid Audio monitors.
This ensures that your mix will not only sound great on your FX speakers, but will translate to speaker systems outside the studio as well.